The final results of the physician-led National Cardiogenic Shock Initiative (NCSI) Study demonstrate a 71% survival to discharge with greater than 90% native heart recovery when best practices are used, including placement of an Impella heart pump prior to revascularization (PCI). The study evaluated the outcomes of 406 consecutive patients who presented with acute myocardial infarction cardiogenic shock (AMICS) at 80 participating sites throughout the United States. The study shows a protocol-based approach to increasing survival rates in cardiogenic shock is reproducible in both academic and community hospital settings. Results were presented today by Babar Basir, DO, director of the acute mechanical circulatory support program at Henry Ford Hospital and co-principal investigator of the study, at the 2021 Society of Cardiovascular Angiography & Interventions (SCAI) Scientific Sessions.

The NCSI Study is a single-arm, prospective study assessing outcomes associated with early mechanical circulatory support (MCS) in AMICS patients treated with PCI. The goal of the NCSI Study is to increase cardiogenic shock survival, which has historically been approximately 50%, by providing early unloading therapy and allowing the heart to rest prior to PCI, promoting native heart recovery. The NCSI Study prospectively validated the previously identified best practices of identifying shock early, placing Impella support pre-PCI within 90 minutes of arriving at the hospital, using a pulmonary artery catheter to guide decision-making, and reducing the use of inotropes and vasopressors.

“The NCSI Study demonstrates the benefit of following a protocolized approach to AMICS, which includes early implantation of Impella. We are impressed with the improved survival rates seen with the use of best practices compared to the stagnant historical survival rate,” said Dr. Basir. “It is important to emphasize that the majority of hospitals in the NCSI Study were large community-based programs where heart attack patients first present. Giving these care teams a safe and effective protocol to manage critically ill patients has saved many lives.”

“NCSI is the largest prospective study of therapy for AMICS done in the U.S. in the last 20 years. We have found that the original observations from the Detroit Cardiogenic Shock Initiative have been reproduced showing significantly higher survival rates,” said William O’Neill, MD, medical director of the Henry Ford Health System Center for Structural Heart Disease and co-principal investigator of the study. “If implemented across the country, the NCSI protocol can save 20,000 lives a year.”

Other investigator-led research demonstrates results similar to the NCSI Study results, including the 2019 Inova Study and the 2020 J-PVAD Study. These studies found an 82% and 77% survival at 30 days, respectively, when best practices were followed including the early identification of cardiogenic shock and the early use of Impella. 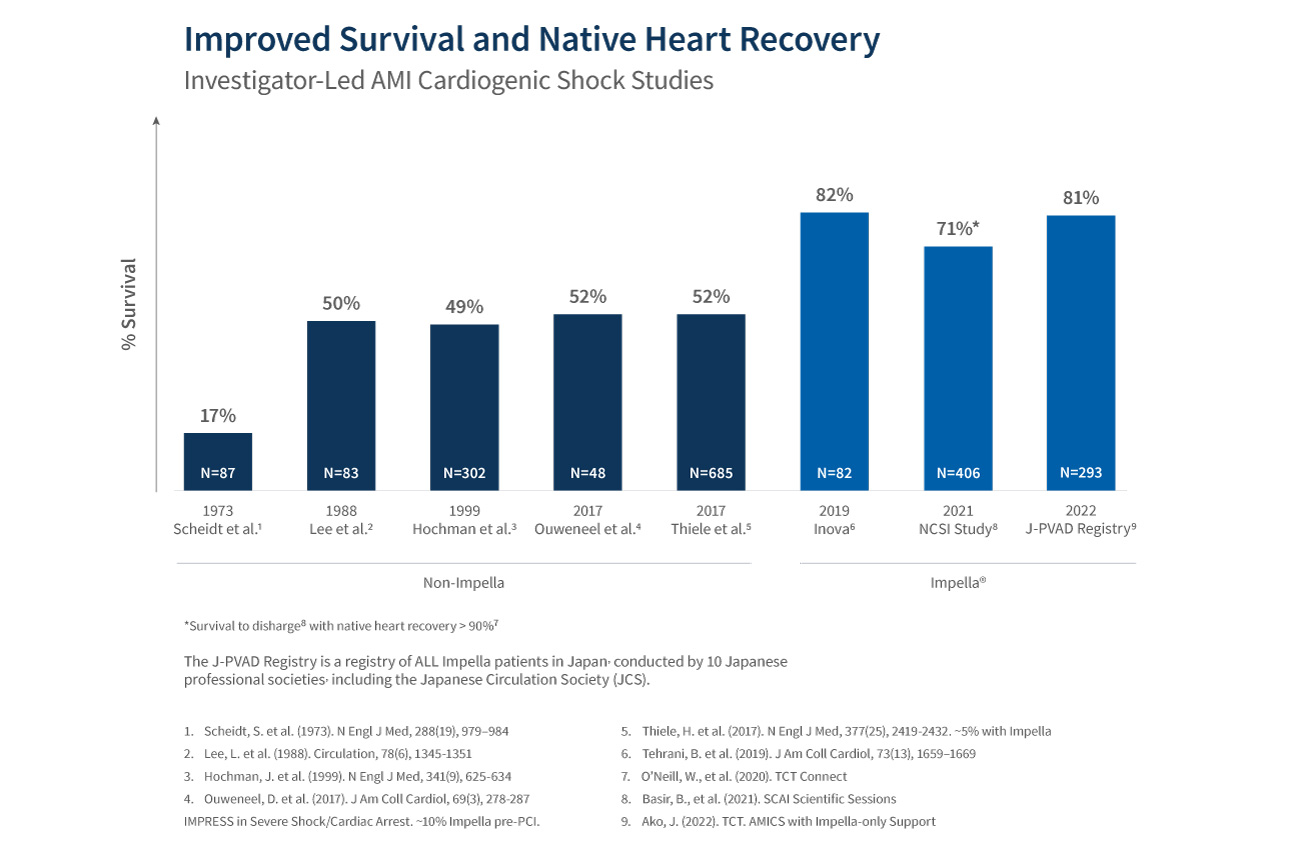 The authors concluded early use of mechanical circulatory support and hemodynamics is associated with improved outcomes. Additional clinical research in the treatment of cardiogenic shock includes the RECOVER IV RCT, which is being developed and will be a prospective, two-arm trial to assess whether Impella pre-PCI is superior to PCI without Impella in AMICS patients. In addition, the DanGer Shock RCT is an ongoing trial in Denmark and Germany assessing primary outcome of death from all causes at six months with Impella CP®, compared to standard of care.