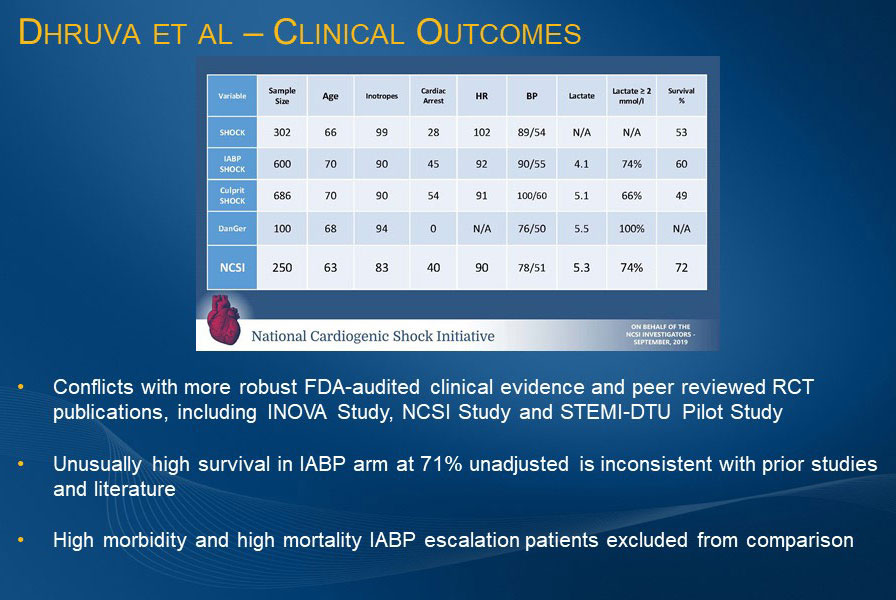 What was the design and objective of Dhruva et al. published in JAMA in 2020?

The stated objective of Dhruva et al. was to examine outcomes among patients undergoing PCI for AMI complicated by cardiogenic shock treated with MCS devices. The primary outcomes were in-hospital mortality and in-hospital major bleeding. In a secondary analysis, patients receiving an intra-aortic balloon pump (IABP) were compared to patients receiving only medical therapy to determine whether outcomes using propensity matching were similar to those observed in the IABP-SHOCK II trial.1

Cardiogenic shock in the two patient registries was defined as one, two or all three of the following: systolic blood pressure (SBP) lower than 90 mmHg, cardiac index lower than 2.2 L/min/m2 for at least 30 minutes secondary to ventricular dysfunction, and/or requirement for parenteral inotropic, vasopressor, or MCS device therapy.2 However, the patient data from the registries lacked clinical and hemodynamic parameters, such as door-to-support time, duration of shock, severity of shock, or metabolic derangement, all of which are strong, well-known predictors of outcome.13,14

Which patient populations were analyzed in Dhruva et al.?

This registry-based retrospective cohort included 3,360 propensity-matched patients undergoing PCI for AMI. Patients who required escalation in their hemodynamic support were excluded from the analysis.1 Previous studies have shown that patients escalated from IABP had higher costs of care, longer lengths of stay, and worse outcomes.15 As a result of this exclusion, patients treated with IABP as an only therapy were likely less critically ill, thus creating a selection bias. The authors of Dhruva et al. state that “there may be residual confounding whereby patients receiving intravascular microaxial LVADs had greater severity of illness than those receiving IABPs.”1

What results were reported by Dhruva et al. and how do these results compare to other published data?

A video reviewing the Dhruva et al. data is available on HeartRecovery.com. Key results are presented below along with discussion of how the authors’ conclusions conflict with Impella® best practice outcomes reported in more robust, previously published, contemporary, prospective studies such as the STEMI DTU pilot RCT, the Inova Study, and the National Cardiogenic Shock Initiative (NCSI) Study.

Dhruva et al. reported that treatment with intravascular microaxial LVAD (Impella) compared to IABP was associated with a significantly higher risk of in-hospital death (45% vs 34.1%) and in-hospital bleeding (31.3% vs 16.0%), but because the bleeding rate in the excluded group was 30%, bleeding may be associated with patient condition rather than the device. From these results, the authors state that the use of intravascular microaxial LVAD compared with IABP may be associated with worse in-hospital clinical outcomes among patients with AMI and cardiogenic shock undergoing PCI, although they also note that “study interpretation is limited by the observational design.”1

In an accompanying editorial by Holger Thiele, MD, and colleagues, they comment, “Despite propensity matching, the observed differences in outcomes between use of the microaxial LVAD and use of the IABP reported by Dhruva et al. may have been related to limitations in these registry-based analyses, and the findings should not be considered definitive. Since the indication for mechanical circulatory support strongly depends on the familiarity of the operator with the device and the severity of cardiogenic shock, findings derived from observational registries may be limited by selection bias and confounding, which cannot be completely accounted for even with sophisticated statistical matching and analyses.”3

Neither of the primary outcome results reported by Dhruva et al. are consistent with other published data. The bleeding data is inconsistent with results from prospective studies, RCTs, and real-world data. It also excludes best practices and outcomes being implemented in recent years.5,16,17,18,19 The 66% survival rate for cardiogenic shock patients who received IABP1 is inconsistent with published literature and FDA-audited clinical evidence, including IABP SHOCK II.6 This unusually high survival rate is likely  attributed to patients receiving IABP being in less severe shock, or perhaps not in shock, and the exclusion of IABP patients escalated to other therapies, which is a known predictor of higher cost and poorer outcomes.

Survival for medical therapy only

Dhruva et al. also reported that the mortality rate for the 16,227 patients receiving medical therapy only was 20%,1 a result substantially challenging the definition of shock in this dataset. These low mortality rates in the medical treatment and IABP arms may be explained by the fact that the analysis did not use the inclusion criteria for cardiogenic shock that has been established in multiple RCTs.

Dhruva et al. attempted to evaluate pre- and post-PCI use of Impella as a predictor of outcome. However, their data does not reflect the standard definitions in which pre-PCI Impella use includes only patients who receive Impella to achieve hemodynamic stabilization prior to the angiogram or PCI and post-PCI includes all Impella use after the initiation of the PCI. Instead, the pre-PCI group in Dhruva et al. includes both patients who received Impella prior to PCI and patients who received Impella as bailout during PCI, likely worsening Impella outcomes. The conclusion in Dhruva et al. that better outcomes are associated with MCS placement post-PCI is inconsistent with published literature and FDA-audited data. Multiple datasets and subset analyses of RCTs have consistently demonstrated the association of survival with pre-PCI Impella use.14, 15, 20-27

The results presented by Dhruva et al. conflict with more than 10 years of outcomes data on Impella reported in robust, FDA-audited, peer-reviewed, real-world published studies and RCTs. Based on the Dhruva et al. headlines alone, this analysis has the potential to impact patient access to Impella. Thus, Seth Bilazarian, MD warns, “Caution is recommended in making important patient management decisions for the patient you may be seeing today when data that conflicts with more than a decade of publications is presented from observational databases.”

What do clinical guidelines say about IABP use?

It has been well known since the publication of the IABP-SHOCK II trial that intra-aortic balloon pump (IABP) support is not associated with better outcomes than optimal medical treatment.4-6 In 2013, guidelines from the American College of Cardiology/American Heart Association (ACC/AHA) include a Class IIa level of evidence recommendation for use of IABP in patients with cardiogenic shock.9 In Europe and Japan, IABP has received a Class III recommendation (not recommended, may be harmful).7,8 Thiele et al. write, “Against this background, a 30% rate of IABP use in the United States between 2015 and 2017 is surprising, and by comparison, adoption of the latest scientific evidence has been seemingly faster in European countries, as shown in several European registries with rates of IABP use of less than 10%, from 2012 to 2017.”10-12

This case study describes how escalation of support to Impella 5.5 with SmartAssist enabled heart recovery in a 33-year-old woman with postpartum myocarditis. 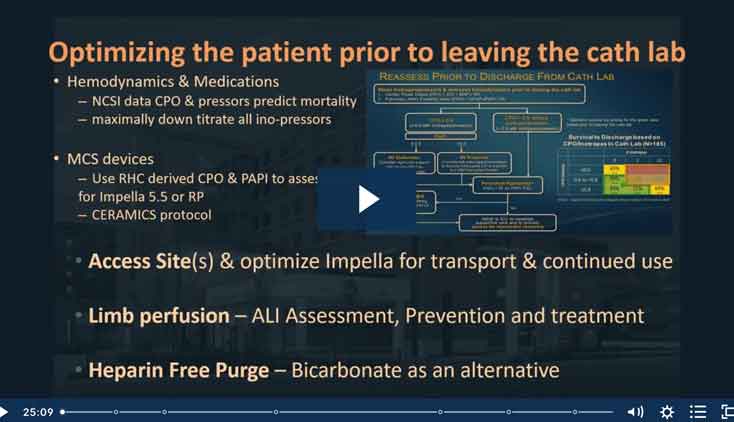