What was the design and objective of Amin et al.?

Amin et al. was an observational, unaudited data analysis based on a retrospective review of payer coding data from the Premier® Healthcare Database. The objective of the analysis, as stated in Amin et al., was “to describe the trends in Impella® use; variation in Impella use and its outcomes over 13 years from January, 2004 to December, 2016; and to compare the clinical outcomes (in-hospital mortality, bleeding requiring transfusion, acute kidney injury (AKI), and stroke) in patients who received Impella vs. intra-aortic balloon pump (IABP), among patients undergoing percutaneous coronary intervention (PCI) with mechanical circulatory support (MCS).”1

Which patient populations were analyzed in Amin et al.?

In this non-FDA audited analysis based on payer coding data, Amin et al. selected a subset of patients undergoing PCI with MCS with either Impella® or IABP from the Premier® Healthcare Database. This database contains data from 1,718,900 PCIs during the analysis period from 2004 to 2016. Patients who received both Impella and IABP devices were excluded as were patients in whom covariate information on 37 potential confounders was missing.1 The analysis also removed patients who were escalated to other therapies, which is a major driver of costs and poor outcomes for IABP.2

The payer coding data used in this analysis combines clinical indications, including elective high-risk PCI along with emerging cardiogenic shock cases. This makes it nearly impossible to properly propensity match patients. For example, in this data set, a patient walking in for an elective procedure is included in the same dataset as a patient in cardiac arrest with cardiogenic shock. 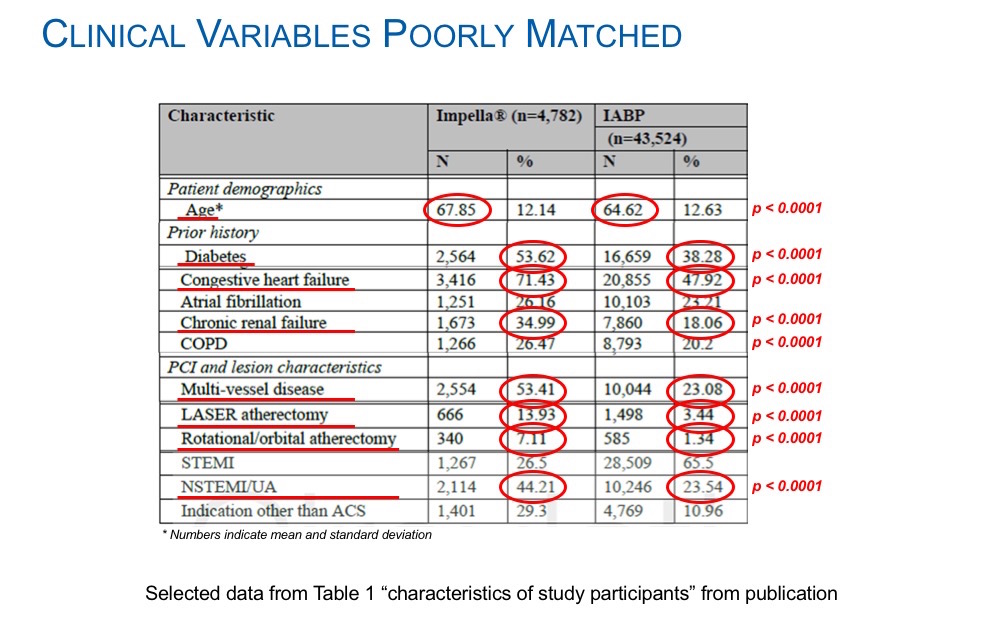 What results were reported by Amin et al.?

Data from Amin et al. was presented at the American Heart Association (AHA) Conference on November 17, 2019. A video reviewing the Amin et al. data is available at this link on HeartRecovery.com

The Amin et al. analysis published in Circulation in January 2020 reported that 9.9% of PCI patients treated with MCS received the Impella® heart pump, and that Impella use increased over time to 31.9% of MCS in 2016. The results reported “wide variation” in Impella use across hospitals and “wide variation” in outcomes of bleeding, death, AKI, and stroke among Impella patients. The authors reported that adverse outcomes and costs were higher in the period of time they deemed “the Impella era” (2008-2016) than during “the pre-Impella era” from 2004 to 2007. They also reported that hospitals with higher Impella use had higher rates of adverse outcomes and costs.1

The authors concluded that Impella use is rapidly increasing among PCI patients treated with MCS, with variability in its use and associated outcomes. Although the authors noted that “unmeasured confounding cannot be ruled out,” they wrote that Impella use was associated with higher rates of adverse events and costs. This conclusion is aggressive because administrative coding data cannot delineate between adverse events common to high-risk patients and device-related events, and observational data should not be used to draw clinical conclusions.

How does the data from Amin et al. compare to other published data?

In 2014, Robert Stretch, MD, and colleagues from Yale University published a study examining data from the National Inpatient Sample (NIS) database. A key finding from this analysis of 11,887 patients receiving short-term MCS between 2004 and 2011 is that patients who were escalated from intra-aortic balloon pump (IABP) had much higher cost, longer length of stay and worse outcomes (see Figure 2).2 NIS is the largest all-payer database in the United States, containing data from Medicare, Medicaid, and large commercial payers on more than 7 million hospital stays. 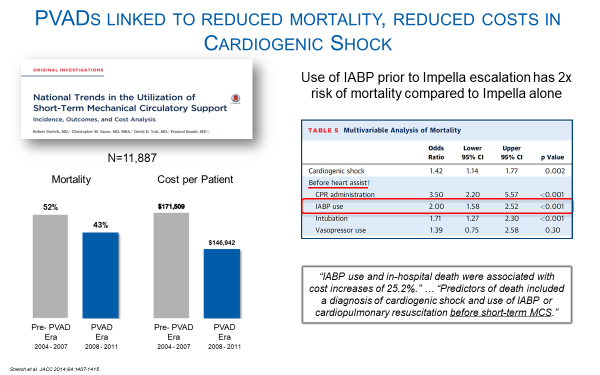 The findings from Stretch et al. are consistent with the real-world Impella® outcomes in cardiogenic shock published by O’Neill et al., which demonstrated a lower survival for patients who were treated with IABP prior to Impella (see Figure 3).3 Therefore, the exclusion of escalation patients from Amin et al. significantly biases the IABP cohort. 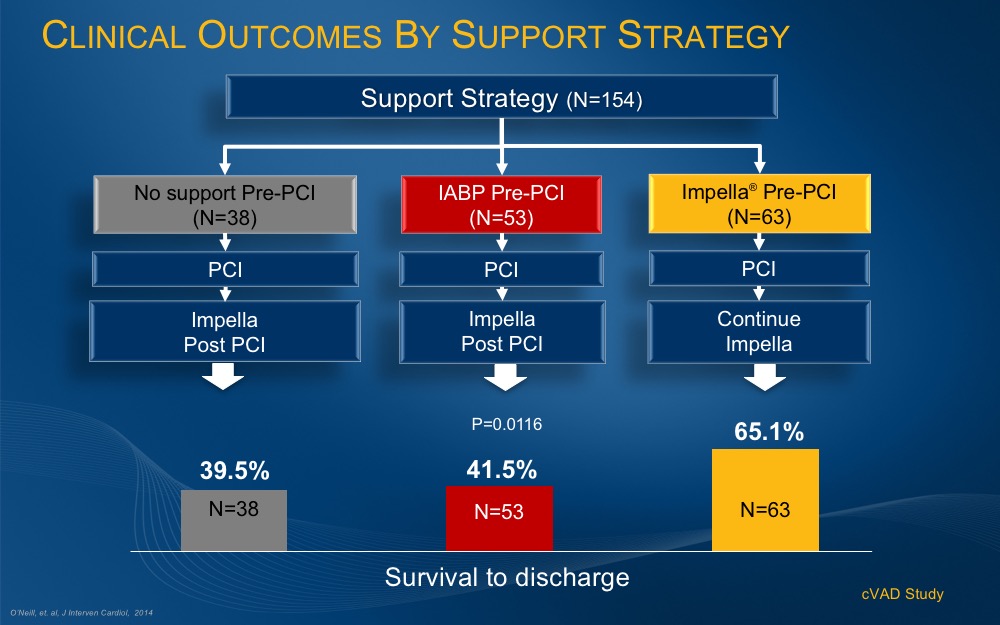 The IABP-SHOCK II randomized controlled trial demonstrated IABP has no hemodynamic benefit, no clinical benefit and no survival benefit.4 This study, published in the New England Journal of Medicine, led to a Class III recommendation (not recommended, may be harmful) for IABP in cardiogenic shock in Europe and Japan.15

Impella has comparable bleeding and vascular complication rates to IABP (see Figure 4), with rates decreasing over time with improved technology and training and operator experience.4,5,6,7,8 Notably, data from the PROTECT II randomized controlled trial, which compares truly similar Impella and IABP patients, show that patients treated with Impella had numerically lower rates of vascular complications compared with patients treated with intra-aortic balloon pump (1.4% for Impella versus 1.9% for IABP).9 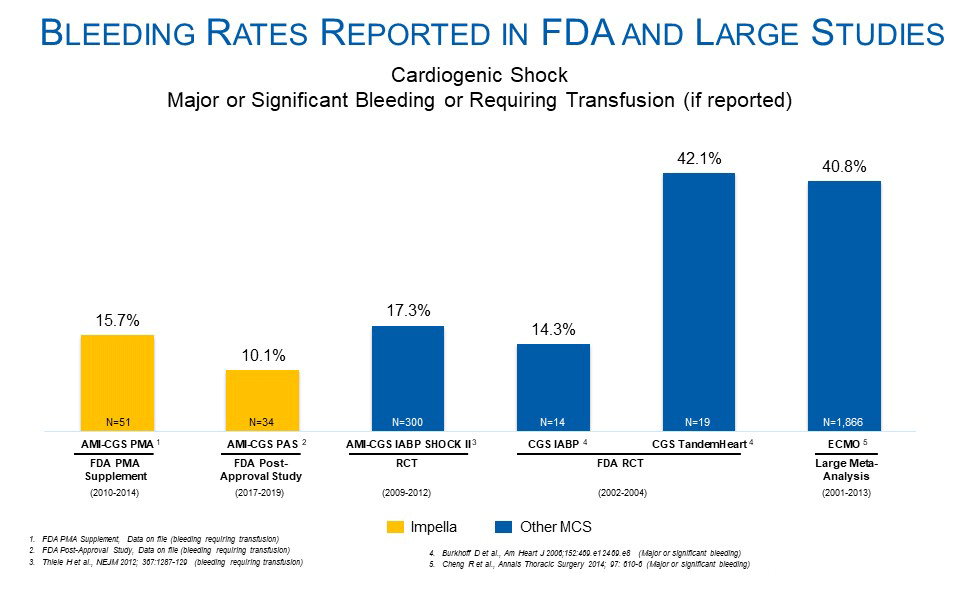 In addition, real-world data from the Impella® Quality (IQ) Database of 96,265 patients from 1,420 sites supported with Impella between 2016 – 2019 demonstrates that greater experience with Impella yields lower bleeding rates, as shown in Figure 5.10 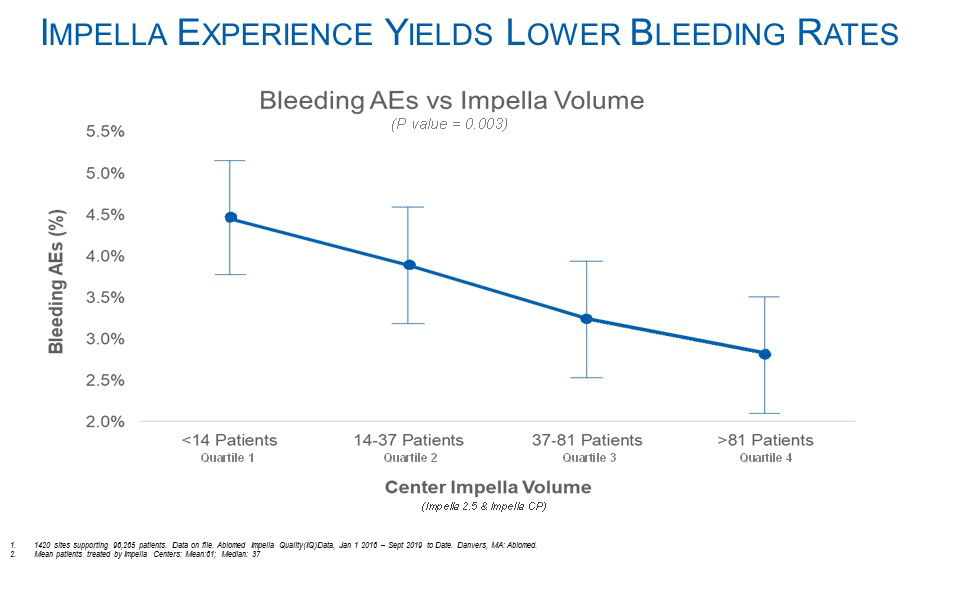 What do leaders in the field of circulatory support have to say about the Amin et al. data?

An esteemed group of physicians who are leaders in the field of circulatory support have been studying the Impella® heart pump for more than a decade. Their research has included FDA randomized controlled trials, FDA pre- and post-market studies and physician-led initiatives such as the National Cardiogenic Shock Initiative (NCSI) Study, the Inova Study, and the Cardiogenic Shock Working Group.

Here's what these physicians have to say regarding the data presented by Amin et al. at the American Heart Association (AHA) 2019 Scientific Sessions.

“The real-world, contemporary experience of the National Cardiogenic Shock Initiative prospective clinical study consistently demonstrates improvements in survival and native heart recovery with best practices that include use of Impella,” said William O’Neill, MD, the principal investigator of the NCSI Study and the medical director of the Center for Structural Heart Disease at Henry Ford Hospital. “Payer databases, like the one used in the AHA analysis, are impossibly biased because the sicker patients will always go to Impella.”

“With two Impella RCTs and multiple prospective clinical post-approval studies on Impella, better data exists,” says Jeffrey Moses, MD, an interventional cardiologist, founding member of CHIP, and professor of medicine at Columbia University Medical Center who has performed more than 18,000 interventional procedures and authored more than 600 publications. “The potential for confounding in these databases presented at AHA is profound.”

“With lack of granularity of patient hemodynamic and metabolic characteristics at the time of MCS use, it is impossible to compare cohorts in any meaningful way based simply on basic clinical and demographic data. Since it is well documented that Impella provides greater hemodynamic support, there is the potential for bias, with sicker patients getting Impella, as appears to be the case. Such bias cannot be overcome by statistical approaches. In addition, we know that as native heart function decreases, the amount of support by an intra-aortic balloon pump also decreases, which fundamentally limits its effectiveness with failing hearts. On the contrary, Impella takes over the pumping function of the heart and unloads the left ventricle which, in several other studies, has been associated with better clinical outcomes,” says Daniel Burkhoff, MD, PhD, director, heart failure, hemodynamics and MCS research at Cardiovascular Research Foundation and primary educator of TEACH, the premier physician training and education program for learning advanced cardiovascular hemodynamics. 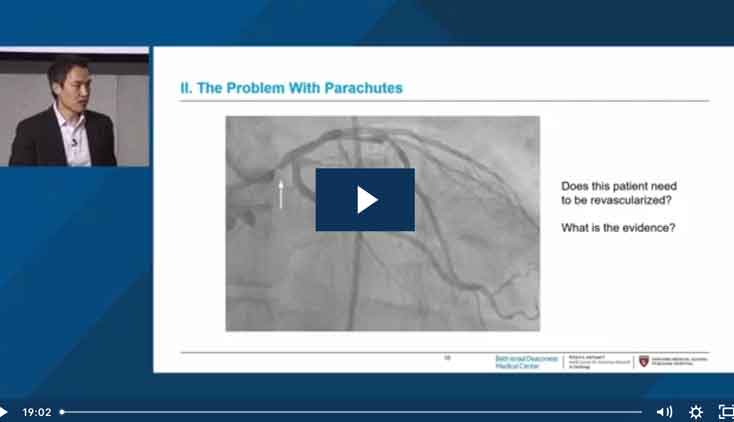 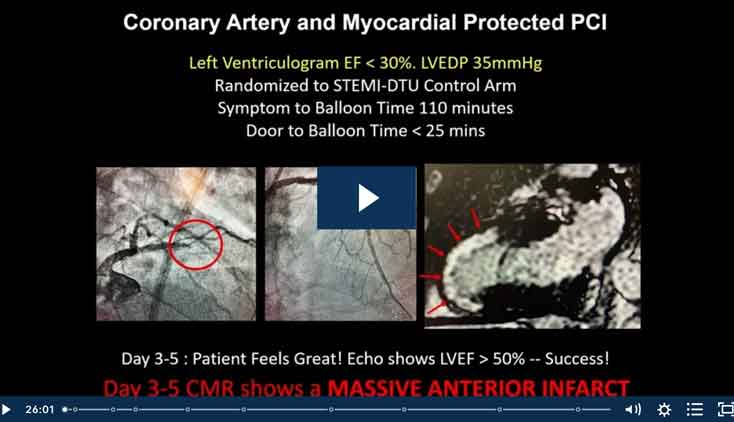 STEMI-DTU™ RCT and the Radical, Disruptive Concept of Delayed Reperfusion

Navin Kapur, MD, discusses the latest science underlying reperfusion and unloading and how it led to the STEMI-DTU pilot and pivotal trials.