More than 15 years of clinical experience and studies with Impella® heart pumps have generated best practices to improve patient outcomes. These best practices include early identification of cardiogenic shock, placing Impella prior to performing the PCI, using a right heart cath and weaning inotropes and vasopressors. 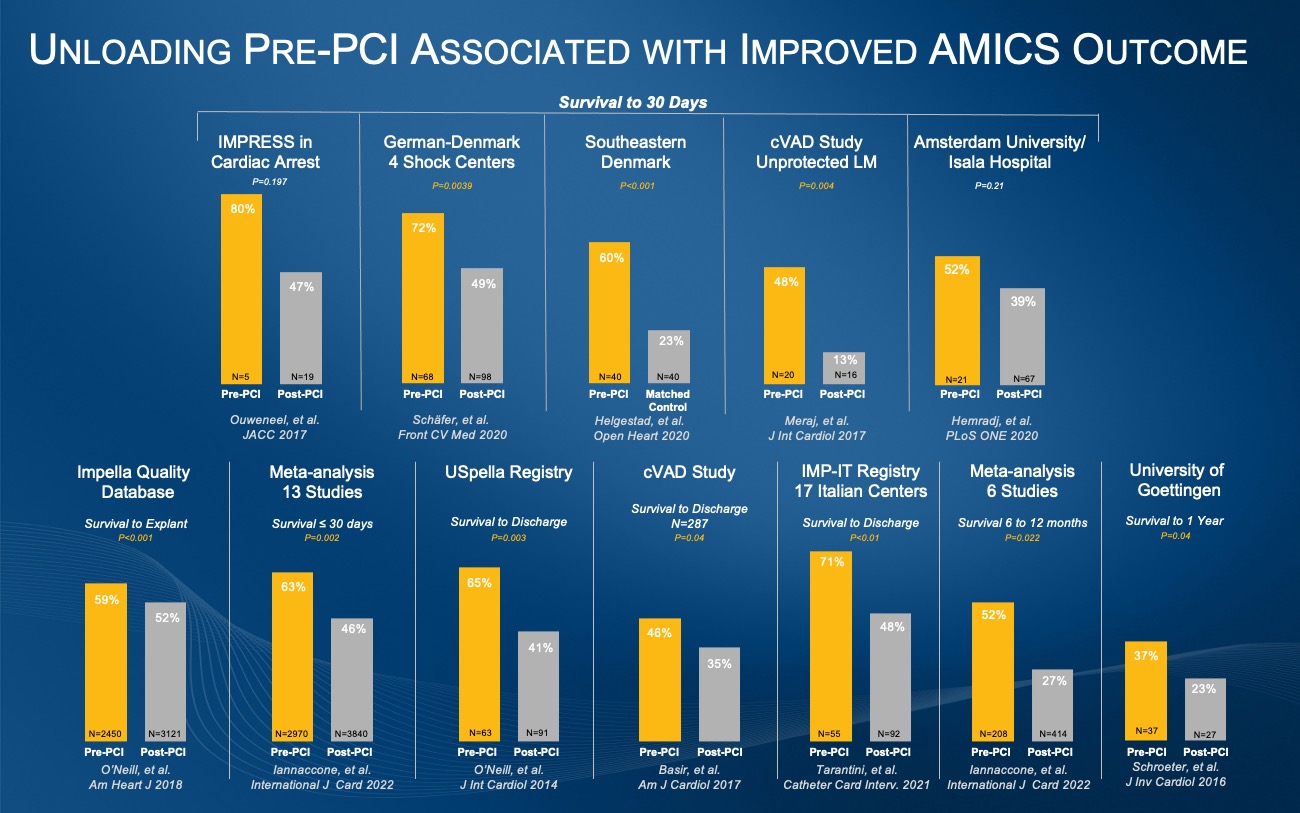 Figure 1. These 12 clinical studies from the United States and Europe demonstrate a survival benefit from the best practice of Impella placement prior to PCI in AMI cardiogenic shock. 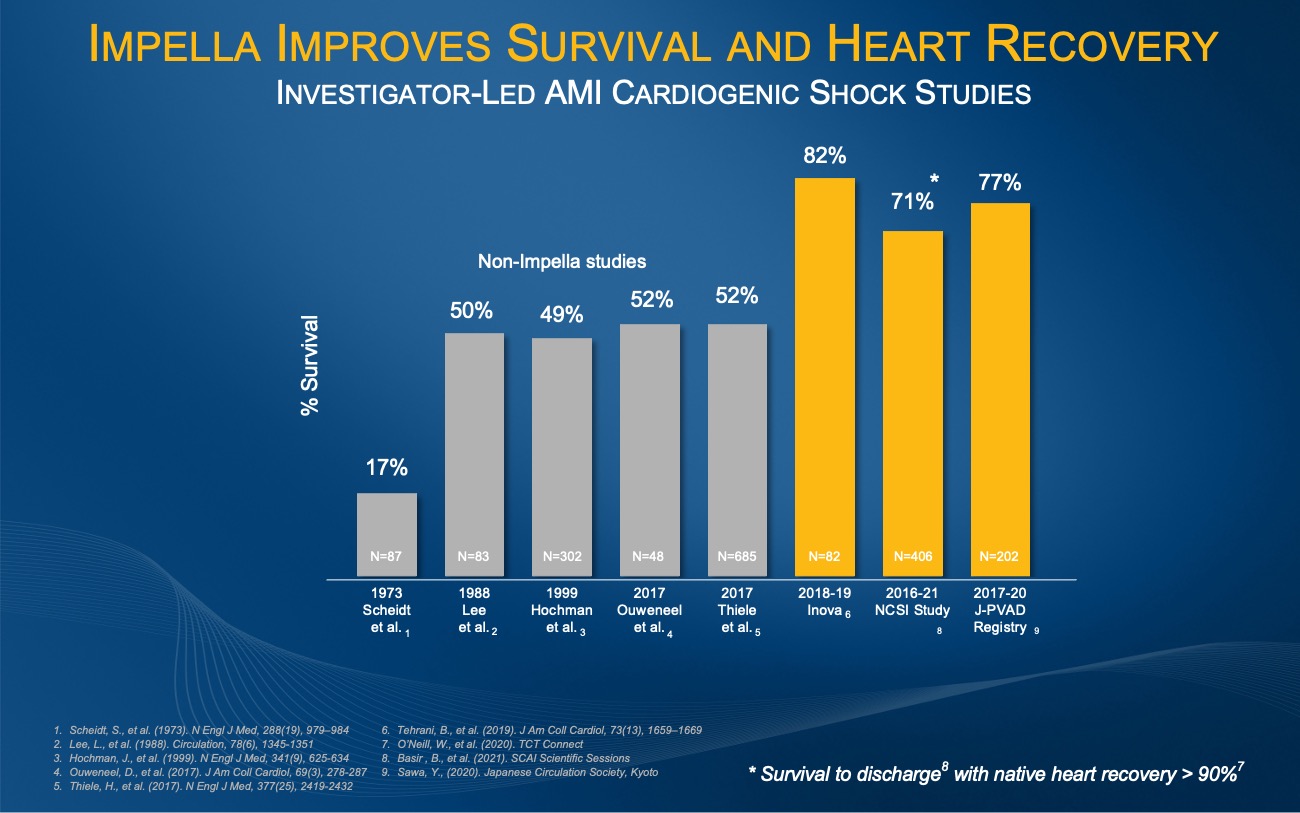 Figure 2. The investigator-led INOVA, NCSI and J-PVAD studies all demonstrate an improvement from the historical AMI cardiogenic shock survival rate of approximately 50%.

A cohort study of all consecutive patients (n=903) with AMICS undergoing PCI <24 hours of symptom onset in southeastern Denmark from 2010 to 2017 comparing 30-day mortality between patients receiving early-IABP or early-Impella CP and their respective control group. That data showed early application of Impella CP was associated with reduced 30-day mortality compared with a matched control group.1

Retrospective analysis of 166 consecutive IABP-SHOCK II-eligible cardiogenic shock patients in four dedicated shock centers that showed an observed mortality on circulatory support with an Impella was significantly lower than predicted in patients with highest mortality risk. Overall 30-day mortality was 42%, and mortality was higher in resuscitated patients (50 vs. 36%) and when Impella was implanted post-PCI (Impella-pre-PCI: 28%, Impella-post-PCI: 51%).2

Evaluation of data from 365 patients treated with Impella 2.5/Impella CP in 17 centers of the IMP-IT Registry with findings that suggest a survival benefit and reduced rates of major bleeding with pre-PCI Impella implantation instead of during or after the procedure. Pre-procedural insertion was associated with an improvement in one-year survival in AMICS patients treated with PCI and HR-PCI and early Impella support was associated with a lower rate of the composite of mortality, re-hospitalization for heart failure and need for left-ventricular assist device/heart transplantation at one-year.3

This study showed women had a 74% relative survival benefit with Impella placement pre-PCI compared to post-PCI highlighting that the benefit of Impella implantation pre-PCI is more prominent in women.5 (see figure 3)

This single-arm trial demonstrated a 71% survival to discharge with greater than 90% native heart recovery when best practices are used, including placement of Impella prior to PCI. The NCSI study evaluated outcomes of 406 patients at 80 community hospitals and academic medical centers in the U.S.

Journal of the American College of Cardiology, 2019

This study of 204 patients in the INOVA Health System showed an increase in survival at 30 days from 44% to 82% when utilizing a standardized team-based approach with a best practice protocol that includes early use of percutaneous MCS.6

This three-year interim analysis of all Impella patients treated in Japan found use of Impella was associated with a 77% AMICS survival rate at 30 days among a cohort at 109 hospitals. The study was conducted with oversight by 10 Japanese professional societies, including the Japanese Circulation Society.7

Pre-PCI implantation of Impella has also been studied in the FDA STEMI DTU RCT pilot study and demonstrated reduction of patient chest pain, improvement of thrombolysis in myocardial infarction (TIMI) III flow, improvement in coronary flow and reduction of infarct to area at risk (AAR) in patients with larger heart attacks (ST SUM >6).

The RECOVER IV RCT will leverage the existing network of sites participating in the ongoing STEMI-DTU pivotal RCT, which are already screening heart attack patients without cardiogenic shock under FDA protocol.

Based on historic consensus guidelines (see figure 3) from 2010-2018, less sick shock patients started on medical management and IAB and were escalated to a higher form of support. Therefore, older billing and registry databases reveal that Impella and ECMO patients are statistically sicker, and therefore would naturally have higher mortality than healthier medically managed or IAB patients. 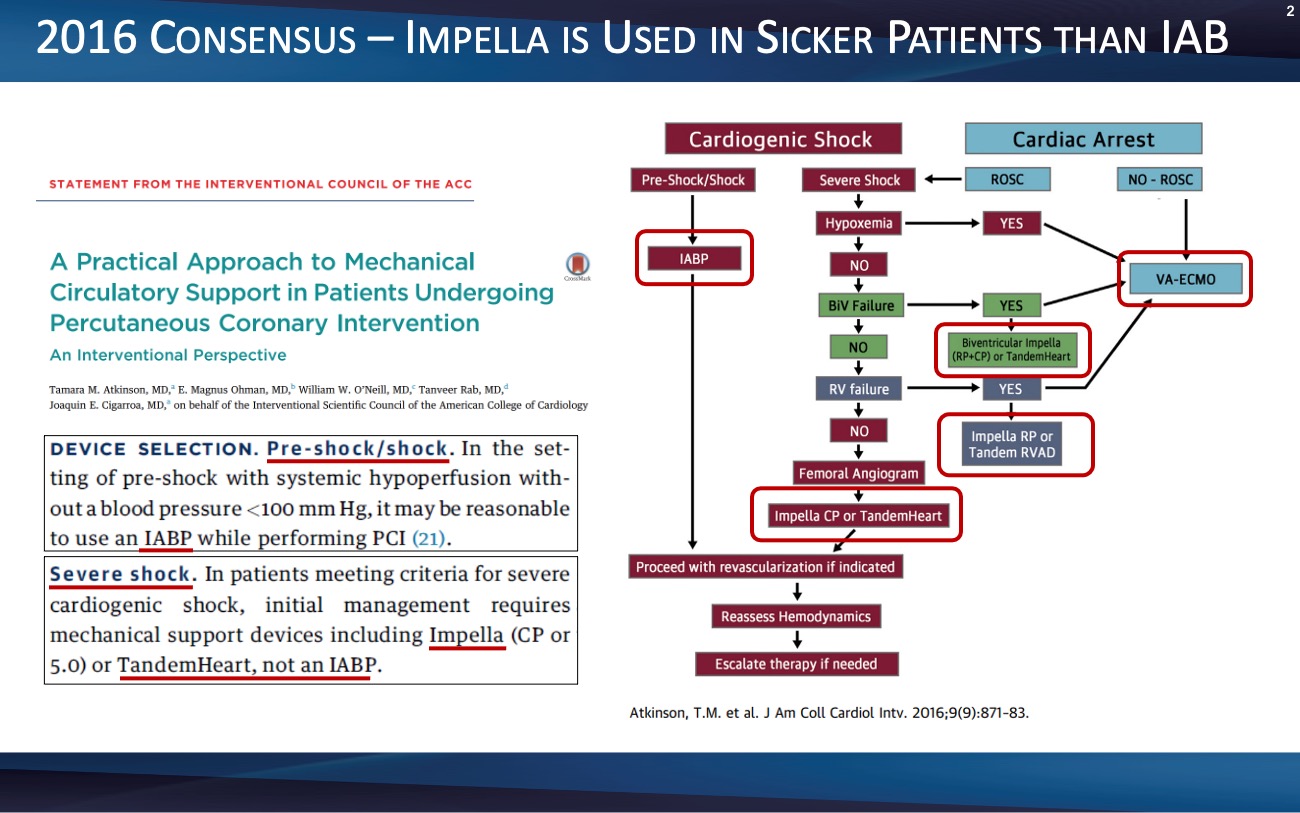 Figure 3. Given consensus guidelines, older billing and registry databases reveal that Impella and ECMO patients are statistically sicker, and therefore would naturally have higher mortality than healthier medically managed or IAB patients.

For patients on IAB requiring escalation to Impella and/or ECMO, most databases are unable to accurately record all IAB escalation or determine insertion timing before or after PCI treatment as a bailout option. (see figure 4) For select databases that can determine escalation, the IAB control arm becomes biased because escalation eliminates the sickest patients in the IAB arm and assigns them to the Impella or ECMO arm. Contrary to these payer and administrative databases, Abiomed’s Impella Quality (IQ) database and FDA and physician studies are able to capture escalation, timing and critical hemodynamic parameters to predict mortality rates that range from 3% to greater than 77% in SCAI shock A-E stages. (see figure 5) 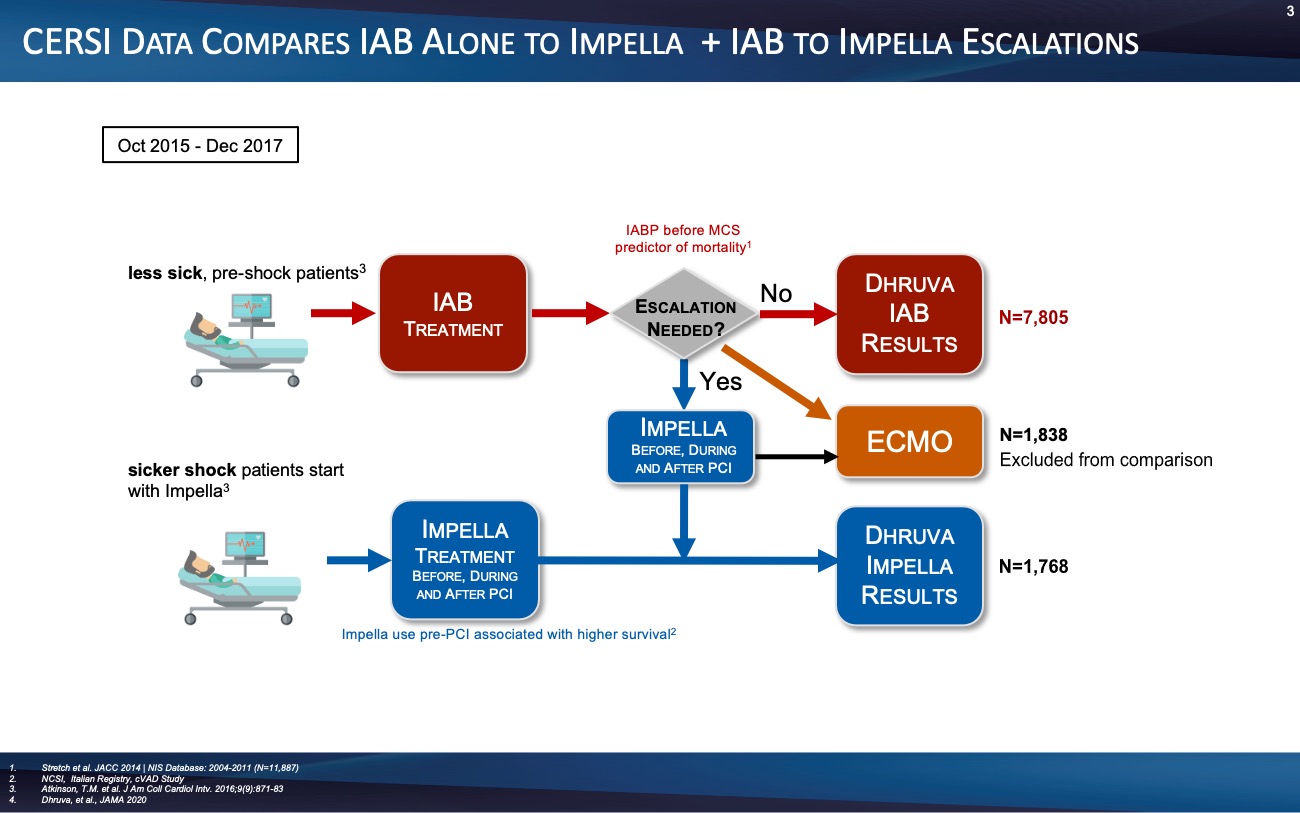 Figure 4. Most databases are unable to accurately record all IAB escalation or determine insertion timing before or after PCI treatment as a bailout option. 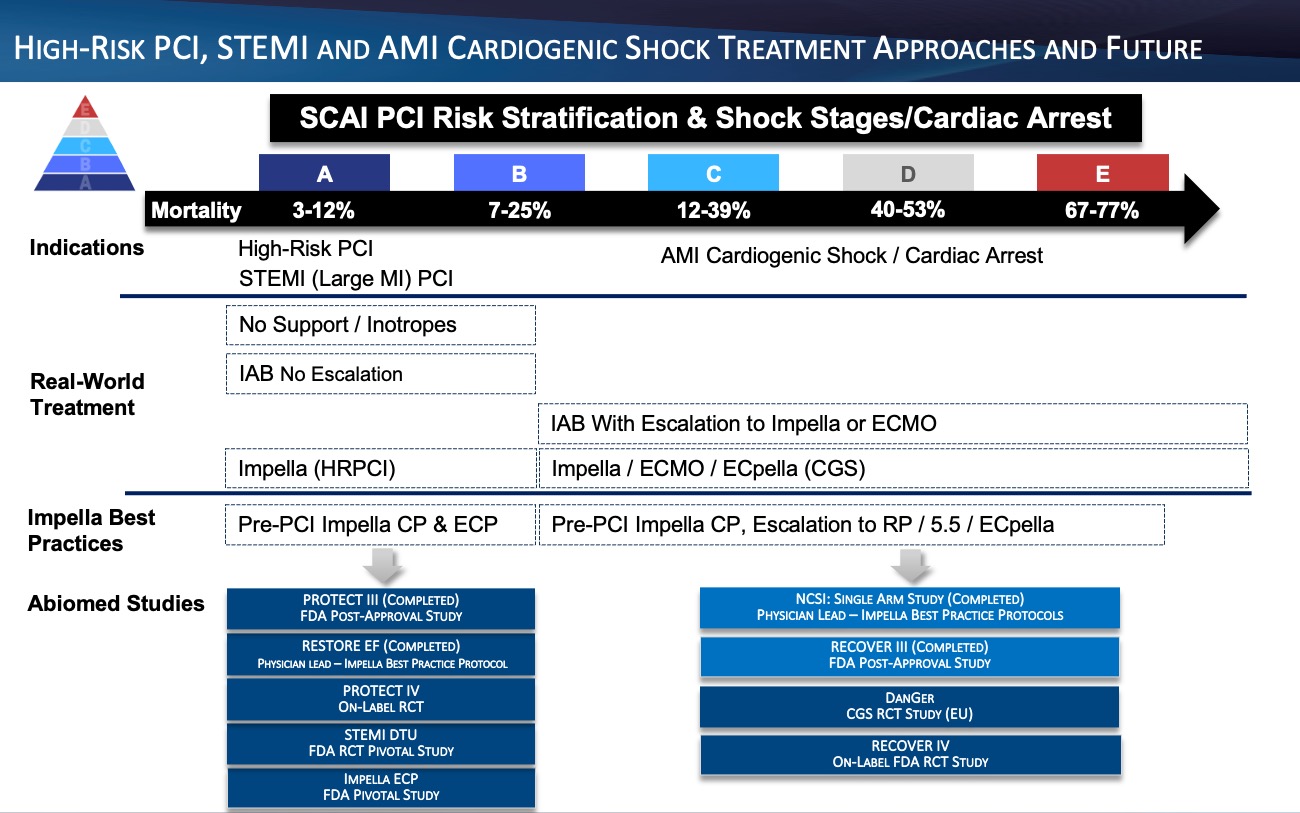